A brief history of trans-fusion

Before I finally move on from my old domain I wanted to create a lasting record of my previous website and the designs that have adorned it. Over the past five years trans-fusion.co.uk has had six designs launched, each design I hope showing an improvement in my own abilities and design skills. 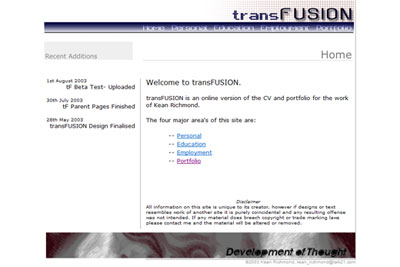 Although not the first website I ever created this is the first where I had full control over both content and design. At the time I built the website I was in my second year at University and was aware of the need to have an online portfolio. As with most of my portfolio designs of the past I had great plans for the site but the content was always lacking. This mostly resulted in the addition of content that was irrelevant or unnecessary. Although this design does not reach the high standards I now aim for I feel the design exhibited an understanding of the medium and didn’t become a showcase of bad web design. 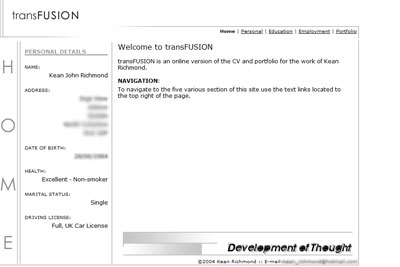 This version attempted to simplify the design, and I believe it succeeded. Although the design is simple, it suffers from being a little bland; creating more visual interest with the text may have improved it. Due to a lack of content the site drew from my CV for content as well as including some portfolio work, although this was limited to University projects only. 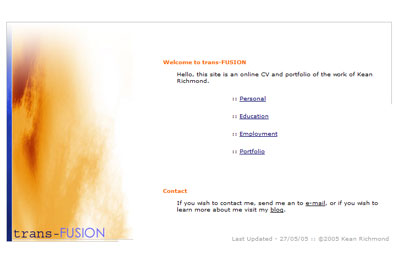 While on my placement year I had the opportunity to undertake some freelance work. With the additions to my portfolio it seemed like a good opportunity to re-design my site. For this design I colour coded the sections to provide a visual distinction between the pages whilst keeping within the overall design of the website. This version began to utilise more imagery in the design, this was to fill more space due again to limited content. 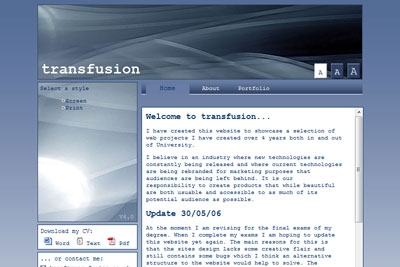 The main aim of the website was to create a site that included some of the accessibility techniques I had been learning at part of my University dissertation. I also wanted to try a design that utilised more colour, giving the website more visual appeal. I think site the version before this design never quite hit the mark, however like all the sites before I think it’s all about the learning process and being able to find out what works and what doesn’t. 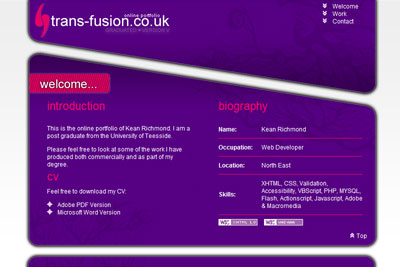 When it came to graduating University I felt that I needed a more striking design that showcased my abilities more for potential employers. For this design I put into practice new methods I had been learning such as CSS based layouts and also single page layouts which was increasingly popular at the time. I was able to incorporate a lot more creativity into the design while the single page layout made more of the limited content. For the portfolio I was able to utilise the thickbox script to add more content for each portfolio item. 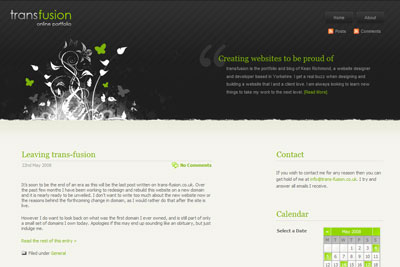 This version of the website was all about showcasing how far I had advanced since leaving University. As I felt my abilities had advanced so much I felt that it was time to create a site that sufficiently showed off what I was capable of. I was also looking to raise my sites profile on the Internet, adding a blog would allow me to attract more traffic to the website. This version was a resounding failure as with the addition of WordPress the site structure became over complicated and the design suffered from constant tweaking. When launched the site was incomplete and a rebuild was already being planned.

Version seven is the design you see now, and the website is finally in a state I am very proud of. I feel the design shows a level of technical ability and design knowledge that previous versions have lacked. I think good design can be timeless and although this design may follow certain trends it should stand up as a representation of my best work.