This past weekend, rather than get on with the stuff that I really should have been doing I instead started working on a new design for my own website. What started as realign of the background and header became something completely different.

On a side note quickly, I’d love to be able to post this stuff to dribbble, so if anyone has or gets any invites I’d be very appreciative of one. 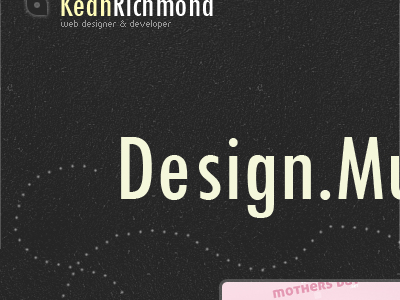 So back to the teaser and yes it’s black and yellow, so you can pretty much tell I’ve gone to town on the changes.

For some stupid reason I like to think up working titles for specific designs, simply because it entertains me and it means I have something different to name the psd’s. For reference the past version had no codename but the one before was named Chaos Theory.

No idea. I was simply playing about with a few different things and ended up with the black and pastel yellow. I tried a few other things and nothing seemed to look as good, so even though it would be a massive change of look for my site I felt I’d rather have a radical change than something I wasn’t 100% happy with.

After looking at the site for a while I do see a colour match to the Lotus Cosworth 72E which for those not in the know is a gorgeous and brilliant classic F1 car, and one I had a toy of when I was young. So you never know it might have been a subconscious thing.

To be honest I have no clue, amazingly the design has taken me only about a day or two to complete, mainly because some elements are based on the current site. Hopefully it won’t take me too long to build but I can’t see it happening before FOWD, which is in a few weeks.

Also I’ve pretty much completed what I need to do for this project so hopefully I’ll be posting the final designs of this in the next few days to see if any feedback results in a few more tweaks.

If you want let me know what you think of the teaser above then add a comment below.